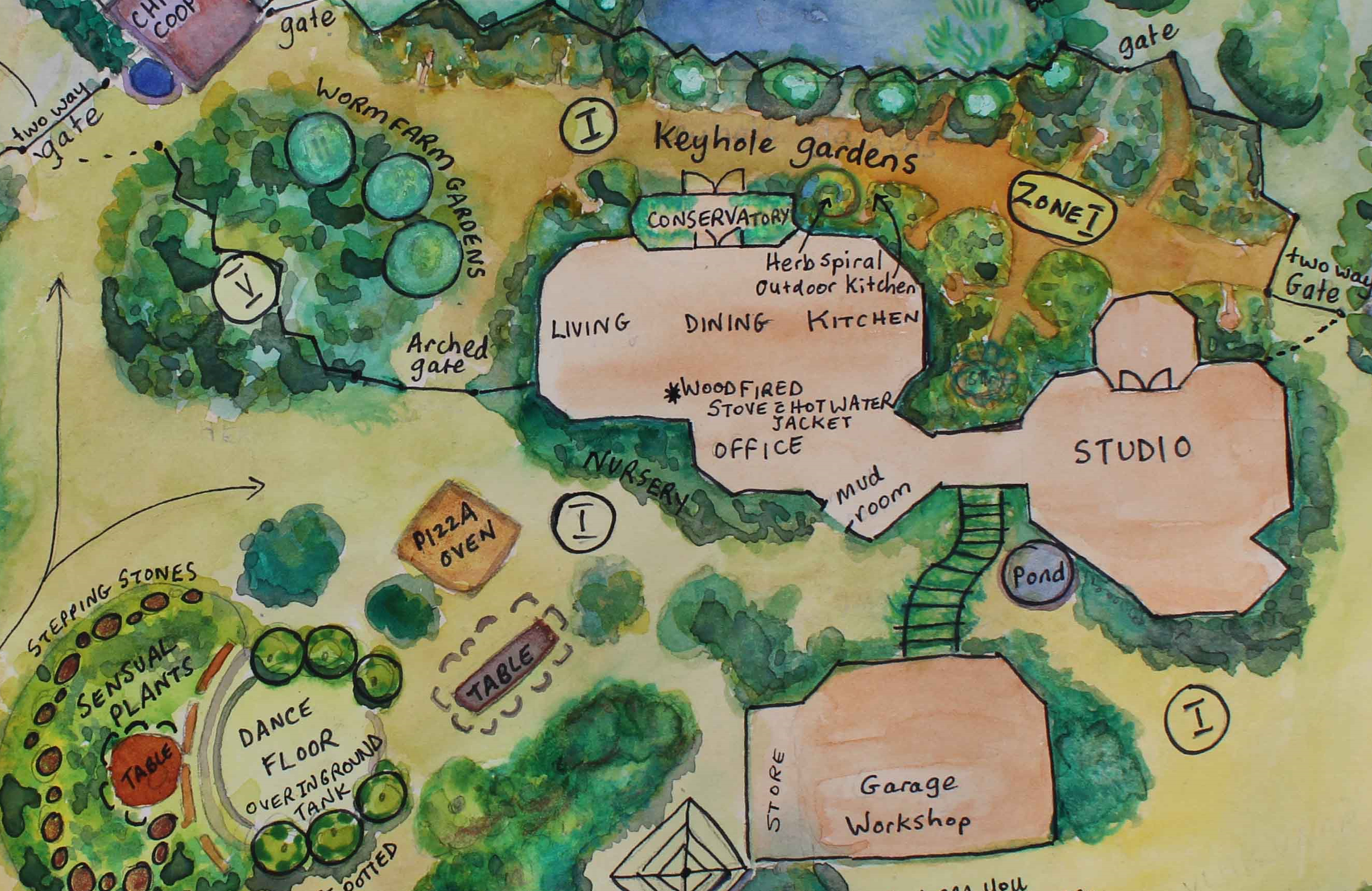 Permaculture Design uses patterns. We create systems that use natural energies, like the remnant forests nearby. Because the forest wastes nothing. And the forest creates no pollution. Naturally, it turns wastes into resources.

Nature has reliable patterns that collect, store and move resources around. Permaculture designs use these 8 basic patterns. By getting to know the patterns and what they do, we can use less energy to create comfortable living.

The basic patterns are spirals, waves, streamlines, cloud-forms, lobes, branches, nets and scatter. As our awareness of pattern develops, our designs improve. Also, we become more aware of the landscape. Slowly the site increases in efficiently by design. Eventually, we start to build a more productive spaces. Social networks can also flourish with an awareness of patterns. Find what fuels an upward spiral. Learn how to boost it. And watch things grow.

Spirals gather in galaxies, sunflowers, cones, whirlpools, and seashells. Also, there are snails, seashells and the crown of a head of hair. In a similar way, there are mechanical uses of the spiral. This includes the spring, a cyclonic vacuum and the blades of a wind turbine.  On the other hand, socially spirals also occur. These include greed, soil degradation, and poverty.

Waves occur in sound, heat and light. Also, there are waves in water, wind and in wavy hair. This pattern has many mechanical and electrical uses. For instance, ocean waves are harnessed with tidal energy, light waves fuel solar panels. Also, sound waves boom from speakers and heatwaves burst from hair dryers.  On the other hand, socially waves include crowds, yawns, laughter, fashions and movements.

The skin on a snake is streamlined to minimise friction. It is quiet. Streamlines are direct but not straight. Straight lines are very rare in nature. Often it is quickly to propel matter in an arc. Streamlines occur on the front of an eagles wing, the tail of a whale and the curve of our lips. Humans have been using streamlines for thousands of years on the smooth hull of a canoe, the point of an arrow and the sharp edge of an axe. Modern uses include aerodynamics, traffic control systems and wet suits.

Cloud-forms disperse from hot springs and tree crowns, steam, fog or a blush on our cheek.  Clouds disperse resources. Mist and sprinkler systems, aerial spraying, spray paints use cloud-forms to create wide dispersal. Social examples include gossip and crowds attracted to street entertainers, gathering and then dispersing when the show is over.

Lobes protrude from the edge of reefs, and in lichens. They fringe the borders of salt pans. Also, our ears, fingers, toes and alveoli in the lungs are all valuable lobes. They are extensions of the main parts. Lobes act to extend energy or resources. Similarly, there are mechanical uses of the lobe. This includes the rudder of a boat, the extra carriages on a train, and bags to carry things in. On the other hand, social lobes also occur. These include gated communities, a board of directors, business clubs, family groups and teams.

Branches harvest and distribute energy and resources. Like highways, branches provide options. Over time, most systems develop branches. Water meanders and trickles into streams. Ancient branch patterns can be found in genetic mutation, the origins of dialects and family trees.

The spider has the most celebrated web. But few people know that bees have a complex network of dances and song to guide one another. Nets serve to connect resources. They also balance the distribution of energy as inputs, flow and output. The skin of the pineapple and custard apple are nets that shield the fruit from impact. Humanity uses netting in weaving of clothes, baskets, food distribution networks and, of course, the internet. Our eyelashes, like little fish-nets, catch dust and sweep it away. The Warka Water tower uses nets of affordable material to harvest water from the air. Above all, resilient social networks hold communities together and check that everyone has care.

Snow, embers, algae, fungi, clumps in swamps, islands, lichen and rocks from a volcano. All things make mess. Eventually, all things scatter. Ironically, scatter is a uncontrollable law in thermodynamics called entropy. Scatter is a quick, chaotic dispersal of resources. As a result, one scatter can trigger more. As a result, life manages to find new niches and explore options for survival. Nature doesn’t need to plan when there is enough energy to scatter resources and see what happens. Nor does nature need to demonstrate control. Consequently, scatters are the result of not controlling. Scatters have been part of many discoveries in biochemistry such as the discovery of germs and antibiotics.

In Summary, the use of patterns is a fundamental key for designing systems that replicate natural systems. Decades ago, Permaculture was acknowledged as a pioneer movement in the world of biomimicry. Lets keep the ball rolling.