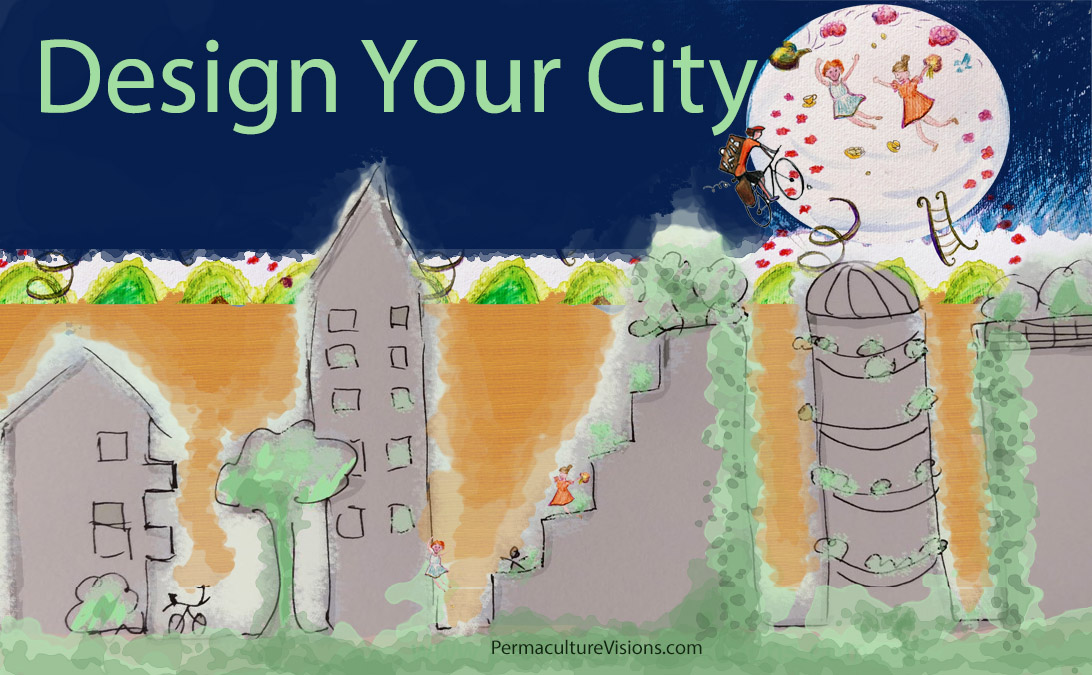 Some people may think they need land to do Permaculture. After-all, Permaculture aims for a culture that is truly permanent. Having land is crucial for sustainable food production with healthy soils near homes of happy people. Right? Umm… not exactly. Having access to land is helpful, but having supportive people is more critical.

Two simple goals can achieve sustainable culture: ‘kindness to others’ and ‘mindfulness of impact’.  Kindness has the capacity to eliminate the widespread destruction brought about by war and greed. ‘Mindfulness’ of our impact would immediately temper destruction of the land by agriculture and industry.

City-living encourages kindness. A peaceful city is more prosperous and less wasteful. Kindness strengthens community. The challenge, however, is how to be mindful of environment impact from a distance. The city is a long way from conventional agricultural lands. So, to achieve a sustainable culture in the city, the city would want to full responsibility for the waste, grow more food in the cities and actively support good agricultural practices.

One consumer in a big city may not feel the power of their choices. But they can be confident in the knowledge that the ultimate power for change is initiated by consumers then supported by their legislators. (Who are also often based in the city). What happens in the city affects the whole region, state, country, other countries and environment.

Far from the presumption that permaculture belongs out of town, the success of a culture is actually in its people. Because people make the choices.  And people drive change.  As a result, the greatest volume of passion and capacity for change is in the cities.

What would a ‘Truly Sustainable City’ look like? Firstly, by applying permaculture ethics in a city design would mean that city becomes totally responsible for its waste – a city that has zero-waste.

Secondly, by utilising mostly natural energies instead of imported fossil fuels then it would optimise the capture of solar energy as well as energy from the waste including sewage.

Thirdly, to build efficiency within the sustainable city, each component (ie. building, docklands, open spaces, road and bicycle highways) would be positioned in efficient relationship to others and the community.

What would your truly sustainable city look like? Be part of the your cities design

Finally, every Sustainable City would look different because it would be designed by the members and adapted by the generations that follow. In fact, the design would not be something that is enshrined on a wall like an old town plan, but would simply be a strong policy for communication and direction.

The Sustainable City would need to exclude the use of components it cannot reuse easily such as plastics and toxic chemicals. That is a huge hurdle in context of current consumption habits. No city today is waste-free. In fact, few countries, let alone cities, can cope with all of it’s waste. Consequently a handful of vulnerable countries a bearing the burden of western world waste.

Until The Future Comes

Until the Sustainable City evolves, there are still things each individual does that has impact. The choices we make affect production and the production we make also lessens impact. Basically, each person can cut waste and build skills.

Fight For Your City

Permaculture isn’t about returning to rural lands to eke out a humble farming existence.  Permaculture farming has fostered a renaissance in farming now known as regenerative farming.  Regenerative farming requires good design planning,  and more time and resources to invest in the land. because we have come to time where most modern farms are nutrient deficient. More resources have been taken out than put in. For future growth, most farms today need a period of healing.

Of course, Urban permaculture will never be as cheap as modern commercial farming because modern farming has been using cheap energy source of fossil fuels. However, food today in western countries is so cheap that most of it is wasted.

City-grown food provides two major benefits:
1. The relationship between people and their food is strengthened by immediacy and transparency
2. there is far less cost in transporting the food to the consumer

Some people may focus on what they need to do permaculture either when aiming grow food or build community resilience. The list of resources is not as essential as the efficient links between them.

It is not about what you have –  it is about how you link them.

In the physical example of the importance of placement there is a dwelling, van, pond, palm and fruit tree. Permaculture design increases efficiency by connecting the components by need and function. In this design, the palm tree offers afternoon shade to the van, morning shade to house and summer shade to the pond. Fallen fruit is accessible by chickens. The pond and chickens are clear from risk from the van.

Growing food in the cities reduces pressure on forests for farmland and it also increases green spaces. Becoming more productive helps mental and physical health. Each person has the chance to reconnect with nature. Food production near to consumers minimises transportation costs. When food is growing nearby, consumers will scrutinise the chemicals used on our food plants. They are also more supportive of healthy pest management systems. Organic food is increasing in value on many levels. The consumer knows what is best for their health and the environment. Best of all is the flavoursome, nutrient-rich foods.

There are side-benefits from growing more food in the cities. A greener city is cooler in summer and less depressing in winter.