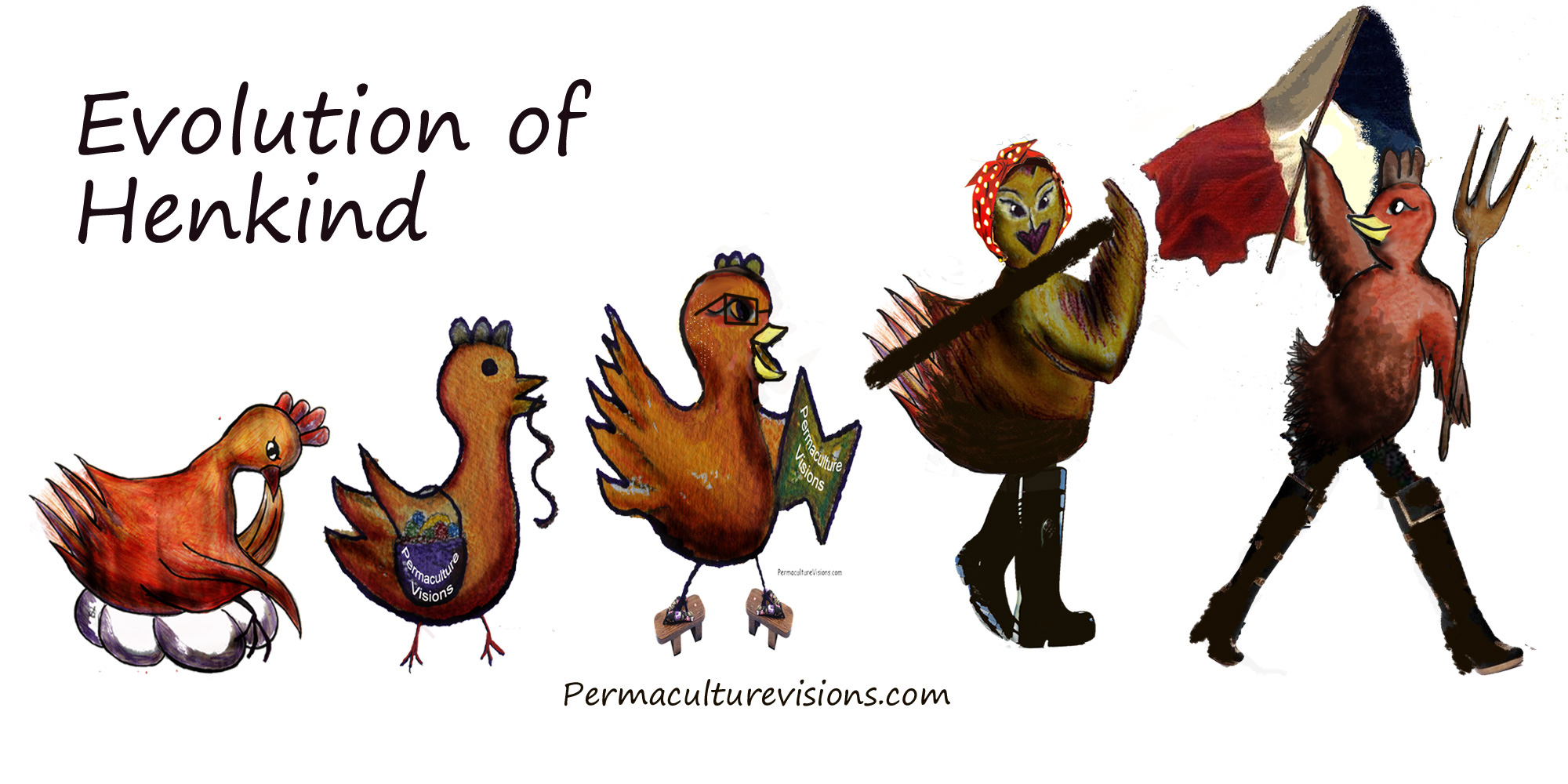 Robyn Francis has been involved in many community permaculture projects and is a strong permaculture leader. She has witnessed the power of community and building trust.

In our recent interview, Robyn thinks it’s interesting that just so much of social permaculture is being driven by women. And it’s not just social permaculture. “When I look at a lot of social movements like those in my village here. The sustainability initiatives here women are the key drivers of almost everything. And building community is a really big part of it. That’s one of the areas of social permaculture that I’m most passionate about is community building and creating resilient communities. I was involved in the whole intentional community movement for a long time from 1979.

On the front foot

When Lismore council threatened to bulldoze all the illegal dwellings on the illegal multiple occupancies and communities that were setting up up and down the coast. We had a cluster of them around Wauchope. We set up multiple occupancy associations and looking at you know the social, economic and governance issues. Land management and design the human dynamics.

Gated Communities Are Shut In

It’s not just about intentional communities or gated communities. We need to work on that wider community level. Little enclaves of like-minded people need to embrace the wider community. And learn to communicate with people who are different to ourselves with different values.

Finding Common Ground in Our Community

We find common ground and and build on that. And so, I’ve been really fascinated with and involved in effective consultation processes. These bring people together and find common ground that we can build on. Then we start to envisage where we want to go to. And what are the baby steps of things that are highly attainable that we can actually act on now. Because I think so often with visioning the visions are so big that people then feel overwhelmed. and of how do we ever get there you know so breaking things down to actually you know bite size chunks and uh doable steps so what can we actually do now with with without you know big injections of money or resources you know what have we actually got the resources to do right here and now and start to make small improvements and then you know the momentum can build from there and and if we’ve got the big vision.

I’m not saying don’t have a big vision we need the big vision because then opportunities arise. And suddenly when a big opportunity comes up – hey we can harness that!

We can learn so much from nature on a spiritual, intellectual and practical level. Nature is naturally generous. It’s not conditional. We’ve got a lot to learn from that. We’ve become a self-focused society and people are afraid to reach out. They are afraid of difference. And afraid of being generous.

Driven By Love, Not Fear

I’m fearful of climate change and what’s happening to our beautiful planet. But it’s not fear that motivates me. It’s the the love of life, it’s the love of the species. And trying to save what we can of planet earth. Also I have a love of humanity. What I am interested in is and how can we come together and express this in a meaningful, creative and convivial way.

Here in our community we’ve done a lot of work in terms of coming together and buying community assets. This is quite an unusual thing. Most communities, including ours in the early 90s, complain about lack of government funding.

When the new school was built the old school went on the market, the department of education if it goes to public ownership it’ll be half the price. So, we had a series of community meetings to buy the old school.  Because we desperately need housing for all our community organizations and initiatives. So, we approached council and they said if the community can raise half the money and develop a watertight business plan to pay off the rest we’ll look at a low to low interest loan. In 18 months the community raised 118 000 (And it’s not a community with much disposable income).

This meant building a lot of bridges in a divided community. We had to come together to achieve this aim. It was so empowering. On the tale of achieving this, we had a visit from Robert Theobald a Canadian futurist. But it takes somebody from the outside, coming in, talking to a community. It was the right time and the right message. It resonated with everybody.

So, we set up a community forum that met once a month. No one organization controlled it. The wider community set the agenda. It focused on solutions. It wasn’t a soapbox for people to indulge in complaining. And we solved a lot of community and social issues.

Even local government councillors used to come and get input from these forums in terms of decisions that they were making that impacted on Nimbin and developing new development control plans for the village and things like that.

After seven or eight years we started to run out of issues. This was really good. Then in 2008 I facilitated a transition town processes. We created a number of working groups. The three big priorities were food security, renewable energy and transport (which is still an issue).

On the food security front, we got two local farmers markets going. We had Robina McCurdy. She was in Australia from New Zealand. So we invited her to conduct a series of workshops. One was with land holders, farmers and producers. It was seeing who was producing what, who had the potential to produce and what were the impediments to producing more of our food needs locally. And then we had one with  the retail sector: shops, cafes and so forth. Then one workshop with the two groups together so we could start to build links.

Wow! ‘What’s come out of that?’ Prior to the food security group  we probably  I know  I might have managed if  I was lucky to see like maybe 40 to 50 percent of my diet would come from the garden. and the local area now it’s sort of around 80 to 90 percent within a 30 kilometre radius of Nimbin and that feels so good and it’s been  I mean these seem like so like practical outside things but they also have a direct impact on people they’re also social systems they’re not just food systems they are social systems and they’re ones that are meeting real human needs  I mean we need farmers we need food three times a day at least and  there’s nothing more personal than what we put in our mouth to become us we are what we eat.

Over the years, doing these projects together as a community starts to build up a degree of community trust. We had a devastating event happen around 2011. The rainbow cafe and the Nimbin museum and a couple of shops burnt down. They were in the heart of the village. Those buildings had a rich history. Those businesses did too, They were a big part of the community and our sense of place and identity. It was pretty devastating.

Then hot on the heels of that, our local organic shop of nearly 20 years, said that they were closing their doors at the end of the week. So we organized a meeting in the hall within 24 hours. 80 people turned up. Including the owners of the of the shop. And we decided unanimously to take over the organic shop as a food co-op. The owners said they would support that community process.

We had a legal entity in place for managing the community for the farmers markets. So, that became the umbrella organization to take on the leasing accounts until we could actually incorporate our cooperative.

So, we had a meeting on Monday night. The shop closed down on Friday night. And on the following Monday morning it opened up as community food co-op. Everybody was buzzing. But you see, 10 years earlier it wouldn’t have happened like that. People working together, and making things happen as a community, builds a degree of trust.

To me, being able to just say ‘yes’, we’re going to form a food co-op was the mark of  a maturity in terms of community trust and functionality.

We’ve seen how the community responds to disasters when we had the fires here. Then when we got cut off by the floods. And even with the lockdown with the pandemic last year. People really look after each other. There’s all these different community groups that just automatically assume different roles. Each is complementary. They’re not treading on each other’s toes. So, all bases are covered.

This is a community that looks after it’s vulnerable. ‘It’s really easy for highly educated, middle class people to create their own little scene’. But, what about the vulnerable in our society? What about the disenfranchised? The unemployed? Problems of addiction stem from unresolved social and economic issues.

A community that has compassion is gold. I love to share the story of what we’re doing here because people find it really empowering. As communities we can start to do a lot more than as individuals. But we need to be able to facilitate. We need good methods of governance and we need to build trust structures. We do through meeting needs and showing compassion. And being empathetic. But also being real.

Join us online to learn more about Permaculture.