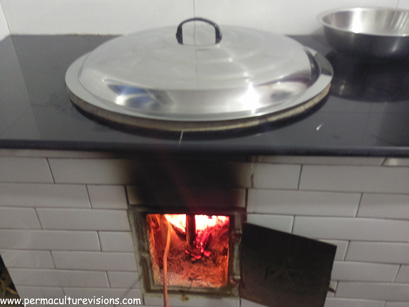 Get Hot Chow With Low Costs

Rocket stoves are super efficient. All you need is a bundle of sticks or dried cobs to cook dinner for the whole family.  Best of all, this fuel is easy to find. There’s no need to chop down trees or burn fossil fuel.

Last month we went on a great adventure 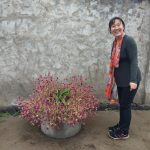 staying in an ancient village in the Shandong province of north-eastern China. We went with fellow Australian, Shoaying. She grew up in rural China and has expertise in Permaculture and Environment Management.

Shoaying is patient, knowledgeable, well-organised and fun. We were keen to see early stove technology known as the Kang. 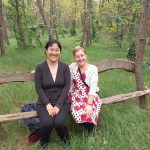 Our Permaculture courses demonstrate the use of integrated technologies such as a hybrid Rocket stove.

According to research at Tongji University, “The Chinese Kang is an ancient integrated home system for cooking, sleeping, domestic heating and ventilation. It is still widely used today in nearly 85% of rural homes in northern China. In 2004, there were 67 million Kangs used by 175 million people.”

Archeologists have found Kangs from 7,000 years ago. The Kang is still cooking, heating, drying herbs and garments and ventilating millions of homes everyday.  Ingeniously, the flue of the stove fans out underneath the big family bed in the next room before rising up a chimney in the next wall.  The warmth must be a joy when it is snowing outside and fuel is low.

Unfortunately, the Chinese Kang is in slow decline due to intense urbanisation. Given that each household uses approximately 4kg of poor quality fuel, a small city of a million people would need to bring in 4,000 tonnes of fuel each day and dispose or reuse the ash. This would incur a transportation and network cost. Not to mention the need to redesign existing urban buildings to incorporate chimneys.

However, more efficient rocket-stoves are growing in popularity in other rural and sub-urban areas of the world. 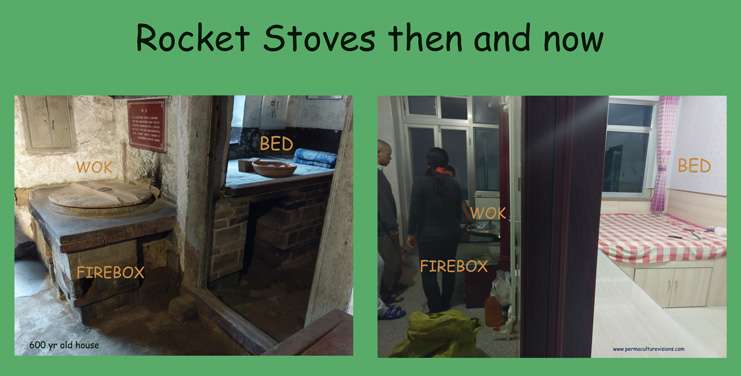 What Is A Rocket Stove? 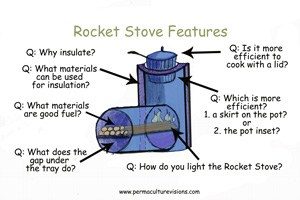 Essentially, a Rocket Stove has well-engineered air flow, there is a J bend to the chimney and  good insulation to increase combustion temperatures. The hottest spot in a rocket stove is not at the flame, it is a little further up where the gases get fully party. As a result, the gases burn off furiously, whipping around in circles before they go up the chimney. A modern rocket stove sounds like a primitive turbo. To get this effect, it has a very good air intake and an elbow in the chimney. The fuel sits on a grate letting the air rush up from underneath. The combustion chamber is underneath the cookplate. In many other wood stoves, a lot of the heat flies away up the chimney.  The rocket stove intensifies the burn then concentrates energy directly at the pan.

Today, science is building toward a standard for the term ‘Rocket’ stove.  Because there is a tiny-sized, yet big difference between a modern Rocket stove [or Rocket-mass heater] the ancient Kang.  The modern Rocket stove has an insulated post-combustion chamber (technical term for a space between the flametips and the cookplate). This chamber intensifies the burn and reduces potential pollutants.  In addition to this technical development, a moving cowl would increase the Venturi effect of the chimney. 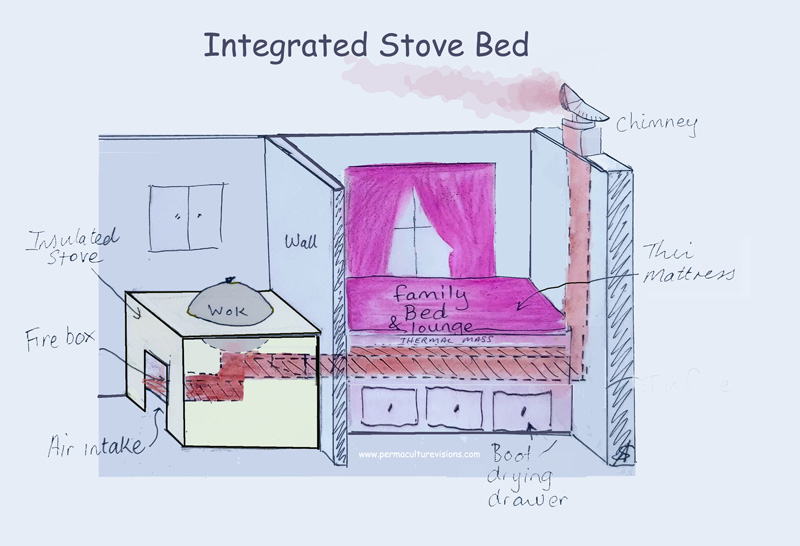 Insulation in a firebox is vital for conserving energy. As a result, the outer area of the stove stays cool. Only the flue heats up. In well insulated stoves, the energy is concentrated on the cook-top.  In China, locally made mud-straw bricks surround their stoves.  Sand or ash in the mud-brick can ensure even higher insulation-rates.  The Kang utilises the residual chimney heat. The chimney gases travel from the cooktop through the wall and fan out along a set of tunnels under the bed in the next room, then up a chimney on the next wall. Unlike the insulated stove, the bed has plenty of thermal mass, and the mattress is thin. So, the bed is toasty warm up by the time the dishes are washed. 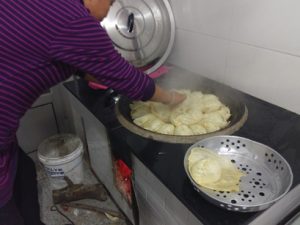 Fuel is easy to find for the stove. For instance, most people burn a bundle of prunings from local orchards or stalks from the corn and wheat fields. In addition to these, dried corncobs  (after the juicy kernels have been removed) combust very well.  Each house has a collection of little bundles of sticks at their door and sunning on the roof.   Corn husks (the papery outer layer) are a convenient, easy, biodegradable material. Perfect to wrap the dumplings.  Also, rinsing and drying the wrappers enables easy re-use. Finally, these used wrappers become great starter-fuel for the stove. 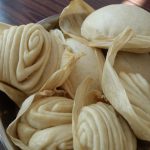 Northern Chinese Kang Stoves are very adaptable. You can cook fish or soup at the bottom of the giant wok and stick corn cakes to the sloping sides. Alternatively, you can use water in the base and insert a grid at half way up to steam foods like the dumplings. The video shows how to make glass noodles.  Rocket Stove cuisine of Northern China doesn’t bake or grill foods. In summary, closed cook-pans with quick cook times are more efficient.

At the end of the day, home-made Mooncakes taste wonderful when steam-baked on a kang stove, the traditional way.

By the way, we have a
Permaculture Design Weekend Course – Nov17th and Nov18th
come and join us! 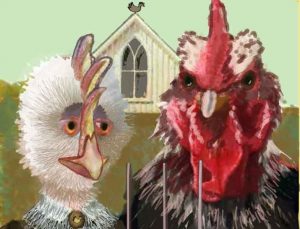